The aim of this page is to create a central resource for a great deal of the flood risk, emergency flood information and government flooding bodies across Elmbridge. If you would like specific information around Flood Risk Assessment and Drainage then please get in touch.

Elmbridge is a Surrey Borough located in the South East region, immediately to the south west of London. Much of the urban area in the north of the Borough is a continuation of the built-up area of suburban London linking through to more rural areas in the south. Elmbridge is bordered to the north by the River Thames. Elmbridge covers an area of approximately 96km2; of which approximately 58% is greenbelt and 42% is urban area.

Unda have years of experience dealing with Flood Risk Assessment and Drainage Reports in the London Borough of Elmbridge. Speak to our friendly team, fill out our contact form or call us on 01293 214444

There is a long history of flooding from rivers in Elmbridge particularly in the Lower Thames, Lower Wey and Middle Mole catchments.

The Surrey Comet reported on 19th March 1947 the most catastrophic river floods for at least 200 years occurred in the United Kingdom.

The severity of the flood risk in Elmbridge from both rivers and surface water was illustrated during the events of December 2013 and January/February 2014 with areas such as East and West Molesey, Cobham, Thames Ditton, Weybridge and Walton-on-Thames specifically affected. These floods prompted the creation the Section 19 Flood Investigation Report: Elmbridge, 28 October 2015 which specifically covers flooding during the winter of 2013/14 only.

Details on historical flooding across the Elmbridge Borough can be found in Appendix C and E of the Strategic Flood Risk Assessment (June 2015) Appendix E and C http://www.elmbridge.gov.uk/planning/sdps/flood-risk/sfra/ 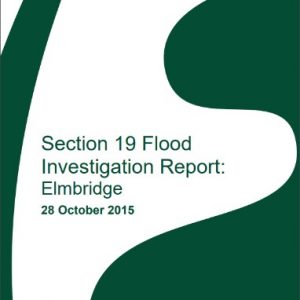 Following the devastating 2007 UK wide Summer Floods which left 13 people dead, 44,600 homes flooded and caused £3bn damage, Defra announced an independent review by Sir Michael Pitt. Born of The Pitt Review and formed in 2009, the Environment Agency in partnership with the Met Office created the Flood Forecasting Centre (FFC) to provide warnings of flooding which may affect England and Wales.

The majority of the Elmbridge Borough is covered by the Environment Agency flood warning and alert system which is run by the newly formed Flood Information Service. The aim of the service is to enable timely actions by residents or occupants to allow evacuation to take place unaided in the event of an impending river flood.

There are 13 flood warning areas in the Elmbridge Borough and those adjoining.  These include:

To establish whether your property is located within a flood warning or alert area and to sign up to the Flood Information Service, details can be found at Environment Agency Maps

If your property is in a flood warning area or you are looking for planning permission within one of these areas then UNDA can help provide detailed reports to assist with applications or purchases.

During times of flooding, Elmbridge Borough has 7 emergency rest centres. These are located within the urban areas of include:

While these have been identified as emergency rest centres, whether each of the centres are operational during a flood event is dependent upon the locations and extent of flooding across the Borough at that particular time. The Council will decide at the time of a flood event which centre will be used.

Map – location of the Emergency Rest Centres within the Elmbridge Borough 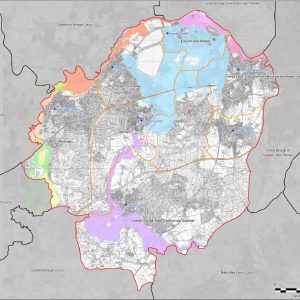 Key Contacts in the Elmbridge Borough to use within an emergency:

If you are located within a flood risk area it is recommended you produce a personal flood plan. The personal flood plan includes a list of things you should do (like moving sentimental items to safety), and provides space for you to note down important contact details such as your utility companies and insurance. Details on how to create a personal flood plan can be found at: https://www.gov.uk/government/publications/personal-flood-plan

A significant proportion of the Borough is located within areas at risk of river flooding associated with a number of different watercourses including the Thames, Mole, Dead River, Rythe and Wey. It is also affected by more localised flooding from surface water generated by heavy rainfall, elevated groundwater, existing drainage systems as well as artificial sources including several reservoirs.

The pressure for development in the borough is high and it is important that the implications of flood risk are taken into account.

Wherever possible development will be directed away from medium and high flood risk areas. However, where development does take place the Council needs to ensure that it is safe, does not increase the risk of flooding elsewhere and where possible reduces risk overall. This must be demonstrated within a Flood Risk Assessment (FRA).

Even for small scale proposals (home extensions, or non-domestic extensions of less 250sqm footprint) if the site is identified in a medium to high flood area, a site-specific Flood Risk Assessment (FRA) will be required to demonstrate that the development is not at risk of flooding and there is no increase in flood risk elsewhere as a result of the development.

How do you know if you are located within a flood risk area in Elmbridge?

The Council has produced a Strategic Flood Risk Assessment (SFRA) which brings together various sources of information to provide a comprehensive overview of flood risk in Elmbridge. To find out if a site is at risk of flooding applicants can:

When planning permission is required, the proposed development will need to comply with Elmbridge Borough Council policies as well as national policy and guidance. The policies each applicant will need to consider will depend on the location, type and size of development. If you need assistance with a planning application in the form of Flood or Drainage reports then get in touch with UNDA today.

Under planning for Elmbridge Borough Council, a Flood Risk Assessment is required if the site falls within Flood Zone 2 or 3 or is located in a high surface water area. The FRA has to take the requirements of Core Strategy policy CS26 (Flooding) and the Flood Risk SPD into account.

Call For Your Free Quote Now

If you need a quote or to discuss your requirements in more detail contact Jackie Stone, one of our experienced Flood Risk Consultants.

Or Fill Out The Form Below 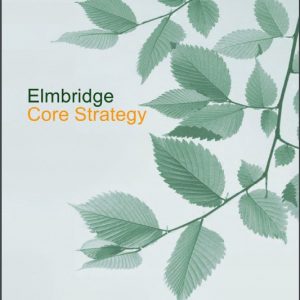 1.1 The Elmbridge Core Strategy Development Plan Document (DPD) is the main document in the Council’s Local Development Framework (LDF) which will eventually replace the Elmbridge Borough Replacement Local Plan 2000. It sets out a plan for the future development of the Borough in the period 2011 to 2026. Its role is to provide a delivery strategy to deal with particular challenges and issues that have been identified as being of local importance. The Core Strategy co-ordinates the delivery of development and accompanying infrastructure. It is a key Council document where big decisions have been made in order to deliver a high quality of life in the most sustainable way possible. Its role is to set out what sort of changes we need to plan for, where they should take place, when they should happen and how they will be delivered. Importantly, given the current economic climate, it also addresses the ‘what if’ scenario should development and infrastructure delivery fail to come forward as predicted.

1.2 The document has evolved through various stages of consultation, which have identified key issues and considered a variety of options about the way in which the Borough should develop. The Strategy is based upon a thorough consideration of the social, economic and environmental characteristics that specifically relate to Elmbridge. It establishes a portrait of the area today and a clear picture of where we would like to be in 2026.

1.3 Elmbridge is considered to have the highest quality of life in the UK but it also has one of the highest carbon footprints of all districts in the UK. The challenge will be to harness the benefits of growth while adopting a programme of action to stabilise our use of the earth’s natural resources. The Council will provide strong local leadership, adopting a positive and planned approach, and work in partnership with infrastructure and service providers to deliver new development that is supported by the necessary infrastructure which maintains and enhances the environment as well as people’s quality of life.

1.4 Other plans and strategies, including the Surrey and Elmbridge Sustainable Community Strategies, the Surrey Transport Plan, Surrey Minerals and Waste Plans, and the Surrey Climate Change Strategy also have a key influence on the content and delivery of this strategy.

1.5 The Elmbridge Core Strategy identifies the major issues which affect the Borough now and in the future, and considers how best to address these in order to deliver the right kind of development in the most suitable places, supported by good quality infrastructure and services. Previous consultations(3) have shaped the document that we have now.

The River Thames Corridor and its tributaries sets out the Council’s coordinated, partnership approach to development adjoining the Borough’s river corridors including development design, enhancing the landscape and waterscape, improving public access to the riverside, reducing flood risk and maintaining open areas as potential flood storage.

The Strategic Flood Risk Assessment (June 2015), which replaced the 2007 version, is an evidence base document which supports the implementation of Elmbridge Core Strategy Policy CS26: Flooding and policies DM6 & DM13 within the Elmbridge Development Management Plan.

The SFRA provides an overview of flood risk from all sources e.g. rivers, surface water, groundwater, sewers and reservoirs etc. across the Borough. It also provides guidance to assist applicants in preparing Flood Risk Assessments to accompany planning applications.

The SFRA should be referred to in the first instance as it includes the definition Flood Zone 3b (Functional Floodplain), which is not reflected within the Environment Agency’s mapping.

Further information can be found at http://www.elmbridge.gov.uk/planning/sdps/flood-risk/sfra/

About the Elmbridge Flood Risk SPD

The Elmbridge Flood Risk SPD is designed mainly as a practical tool to assist applicants in preparing Flood Risk Assessments (FRAs) to accompany planning applications in the Elmbridge Borough to ensure that sufficient information is provided to support an application.

The  Flood Risk  SPD does not set new requirements for validation or policy, rather has been prepared to assist in the implementation of Elmbridge’s Core Strategy policy CS26 (Flooding) and the submission of Flood Risk Assessments.   Specifically, the guidance will help applicants to:

Supporting documents can be found at http://www.elmbridge.gov.uk/planning/sdps/flood-risk/

When undertaking a development on a site, Environmental permitting rules apply if you want to do work:

There are other laws that may also restrict what you can do on or near a main river or sea defence. The Environment Agency are able to assist.

An environmental permit which is often required within the Elmbridge Borough is a Flood Defence Consent.

To discuss any flood risk or drainage assessment issues around planning and development please get in touch with our friendly and experienced team today.