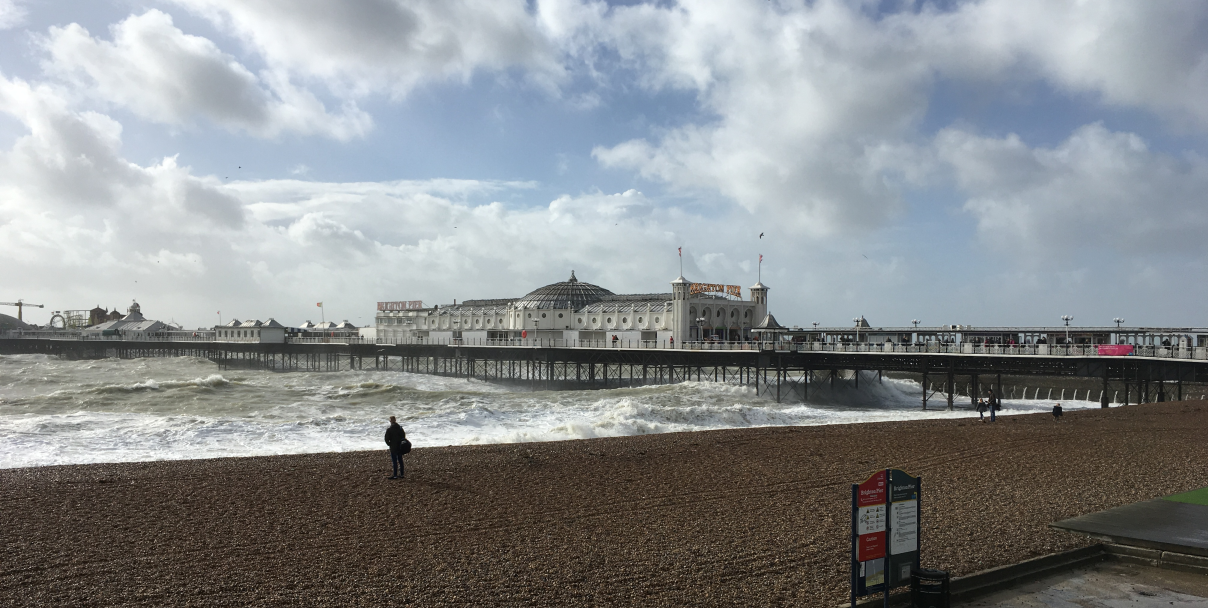 The United Kingdom and Republic of Ireland were subject to torrential rain and strong winds this weekend as a result of Storm Brian. Whilst not as extensive as previously feared, Storm Brian exacerbated flooding and disruption in areas that have been recovering in the wake of Storm Ophelia which wreaked havoc days earlier.

Storm Brian was labelled as a ‘Weather Bomb’. A term used to describe a specific low-pressure system where the centre of a storm drops by at least 24 millibars within a 24-hour period. Although the mechanics of this phenomenon can be difficult to imagine, the Met Office compare the movement of air similar to the way an ice skater spins faster by drawing their arms in as they rotate.

The results of this low-pressure system were felt throughout the British Isles with maximum wind speeds of 78mph recorded off Lyn Peninsula on the North coast of Wales (Met Office). Consequently Yellow weather warnings were issued by the Environment Agency for Wales, the Midlands, South West, South East, North West and Eastern England. These were in place for the whole of Saturday.

Most of the damage and flooding from Storm Brain was a result of watercourses exceeding channel capacity and coastal defences being overtopped. Roads were made impassable in coastal locations such as Aberystwyth and Cardigan Bay with videos emerging of monstrous waves pounding the British coastline.

In Ireland, Met Éireann (the Irish weather service) placed an orange weather warning across the entire country. A number of cities in the Republic of Ireland, including Limerick, suffered localised flooding. On Saturday, Limerick City and County Council released footage on social media depicting car parks and walkways inundated with water. This flooding occurred as a result of the River Shannon, which flows through Limerick, overtopping its defences as storm conditions coincided with a high tide. Reports of flash flooding were also recorded in Galway, Cork, Kilkenny, along with multiple other locations throughout the United Kingdom and Republic of Ireland.

The extreme weather conditions prompted officials to warn members of the public against visiting coastline areas and putting themselves in unnecessary danger to take ‘storm selfies’ of the weather bomb. The Environment Agency issued a statement advising drivers to take extra precaution on the roads, especially when traversing flood waters, as it only takes 30cm of flowing water to move a car.

Dozens of flights were also cancelled over the weekend including 20 British Airways arrivals and departures to/from London Heathrow; leaving hundreds of customers forced to re-book. Rough seas forced many ferries to remain moored throughout the duration of the storm.

In the aftermath of Storm Brain, and Storm Ophelia, it is clear that improvements need to be made in the way the British Isles manages events of this magnitude. One Aberystwyth councillor is calling for storm-threatened coastal towns to be protected by a national sea defence programme.

In the meantime, forecasters are predicting further storms this autumn and winter with more travel disruption, loss of power and flooding feared.

Both long and short term movements towards protecting homes and properties from flooding can only begin with initially understanding the level of flood risk they may face. If you would like to learn more about obtaining a Flood Risk Assessment for your property, do not hesitate to contact us here at Unda.