Flood damages in Europe to increase 200% by century-end

Flood damages in Europe to increase 200% by century-end

Flood damages in Europe to increase 200% by century-end. As the climate warms, flood damages across Europe are likely to be considerably higher than previously thought. According to scientists from the European Commission’s Joint Research Centre, extreme river floods now occurring every 100 years will become twice as likely in the next three decades without efforts to reduce emissions.

That means we can expect climate-related damages to land, property and people across Europe to increase by an average of 200% by century-end, say the authors.

The researchers presented the results of their paper ‘Global warming increases the frequency of river floods in Europe’   at this year’s European Geosciences Union (EGU) conference which was held in Vienna on 15th March 2015.  The press conference entitled ‘Droughts and floods in a warming climate’.

Limiting global average temperature rise to 2C looks increasingly unlikely at current emission rates, Dr Lorenzo Alfieri lead author and researcher (from Institute for Environment and Sustainability, European Commission Joint Research Centre, Ispra, Italy) of the research expressed to the press conference this morning. That means there is a need for scientists to assess the impacts of higher levels of warming, he said.

The researchers examined how flood risk in Europe is likely to change under the Intergovernmental Panel on Climate Change (IPCC)’s highest emissions scenario, RCP8.5. This scenario projects 5 to 6C of warming above pre-industrial temperatures by 2100. 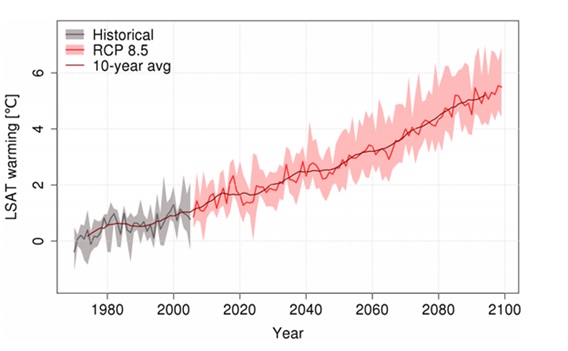 The new research accomplished a number of technical advances that enhanced the reliability of flood projections compared to previous studies, say the authors.

The researchers combine regional climate projections under the IPCC’s high emissions scenario with a complex simulation of the water cycle. This captures how quickly water disperses after falling as rain and how it cycles through terrain, soil, vegetation, the atmosphere, rivers and oceans.

The study adds in maps of the areas in Europe most vulnerable to flooding in terms of land use and population density, as well as the existence of flood defences. This gives an estimate of the overall flood risk from European rivers breaching their banks this century.

The model results show that of 22 large European river catchments, nine see an increase in the total average annual rainfall by 2080. These are mostly located in northern and Eastern Europe, with the largest changes in Iceland and Scandinavia (blue areas in the left map below). In seven southern European regions, annual average rainfall decreases (red areas). 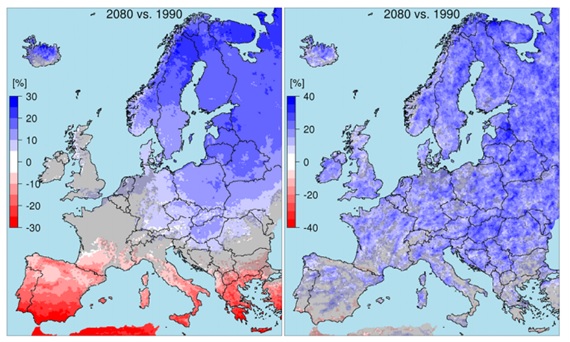 Change in average annual precipitation in 22 European regions containing large rivers by 2080. Change in annual maximum daily precipitation (right). All figures are relative to the average for the baseline period of 1976 to 2005 (midpoint 1990). Source: Alfieri et al., ( 2015)

When the team looked at the maximum rain falling in a single day – a measure of extreme precipitation – they found it increased in 15 out of 22 European regions by 2080 compared to 1990 (blue areas in the right hand map above). No areas saw a decrease, the authors note.

But the link between heavy rainfall and flooding events is not direct. Altered rainfall patterns interact with changes to other hydrological processes, such as an increase in the rate of evaporation in plants and less snow falling, which means less meltwater runoff. This is why scientists see differences in future patterns of rainfall and flooding in some regions.

Overall, the new research projects that the amount of water flowing in large European rivers will increase in 73% of the study area by 2080. This is shown by the blue lines in the map below. Taking into account the size of the rivers and the projected changes, this corresponds to an average increase in water flow of 8% by 2080 compared with 1990. 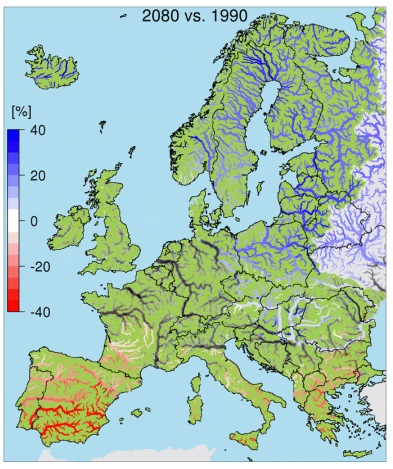 The authors conclude that changes to rainfall and streamflow mean that across Europe, extreme floods are likely to double in frequency within the next three decades. For example, floods that used to happen about every 100 years will start to occur every 50 years instead.

A doubling in frequency of these extreme events corresponds to a tripling in the expected damage by the end of the century in Europe, Alfieri told journalists today. The increase in flood damage is due mostly to a rise in the frequency of extreme flooding events rather than the magnitude, as previous studies have stated, Alfieri added. The damage caused is also a consequence of whether or not the water level breaches flood defences. A recent paper by Alfieri and colleagues explains:

“substantial increase in the frequency of peak flows below the protection level is likely to have a lower impact, in terms of population affected and economic losses, in comparison to a small but significant change in extreme events causing settled areas to be inundated by the flood flow.”

Other participants at the conference included: